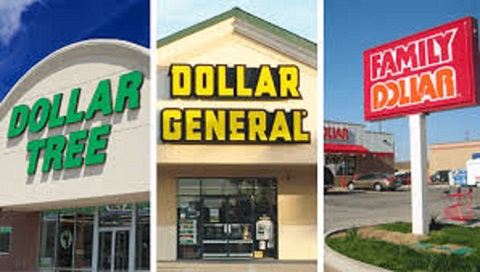 What’s in Store at the Dollar Store? Economic Challenges for Everyday Americans

We know inflation is coming. Food and gas are already showing signs of price increases. US food inflation shot up from ~2% to over 4% when the pandemic hit. Global supply chains are showing signs that the cost to deliver anything globally is increasing. Those costs have always been passed along to the end customer, and this time is no different.

So the average consumer has less income, and their basic costs are rising.

Thankfully, we have the dollar store. That reliable bastion of savings and value. The dollar store is quietly offering identical products to what we all need from big box stores and grocery stores. At much lower prices, too! They are also typically located near big box grocery stores and retailers, making them easy to switch to. More and more low-income consumers will be looking for ways to stretch their limited pay cheque when the COVID stimulus party is over. When that moment comes, it will be too late to get into the dollar stores without overpaying.

A McKinsey report from August 2020 notes consumers are “trading down”, or buying the less expensive version of a product. This shows the sensitivity to price that consumers might be expected to show during an economic downturn. The question is how long will this price sensitivity continue? Even after the employment picture looks better, there’s no guarantee that incomes rise back to previous levels any time soon. It could take years for everyday Americans to get back to square one.

More consumers are also spending more online. Ecommerce has had a boom year nobody in the industry would have predicted. But dollar stores are rare in that they cannot be replaced by ecommerce nearly as easily. Buying big ticket items online makes sense, but small essentials don’t justify paying shipping costs. Dish soap is still something we’re going to buy in a physical store. Amazon cannot compete with these mighty little stores scattered across the US.

Now it isn’t just those folks without extra income who are more likely to spend more at the dollar store – the stigma of the dollar store is always reduced after economic downturns. After the great financial crisis of 2008, more wealthy consumers started shopping at dollar stores. That doesn’t mean we’ll see the Kardashians in a dollar store anytime soon, but again it’s a source of growth for this category.

The structure of the industry is incredibly attractive and often overlooked. There are only three dominant players in the industry (Dollar General, Dollar Tree, and Family Dollar), making it an oligopoly. An oligopoly is characterized as an industry with few dominant players. Think of Pepsi and Coke, or Visa and MasterCard. These firms can’t prevent each other from having significant influence in the market, making for consistently strong profit margins. Sales are expected to experience strong growth for the reasons outlined above. But these firms are also set to see potential margin expansion and bottom line growth.

Malls all over the world struggled in the years prior to COVID and were closing down left and right. Not dollar stores. They accounted for 46% of total new stores opened from 2010 to 2020, according to a report from Deloitte. I can’t think of any other physical retail store that has grown as consistently.

One of the most permanent changes COVID will leave many families with is a new home. A new home in the suburbs. 40% of Americans living in urban areas stated they would consider moving “out of populated areas and toward rural areas”. The concentration of dollar stores is greater in the suburbs and rural areas. Again, we see reason to believe the customer base is growing.

So we’ve got more people out of work, stimulus measures winding down, a mass migration towards existing dollar store locations, and a nation of people who are seeing their cost of living rise due to massive inflation concerns. All these trends position the dollar store category to perform well even if they aren’t run well. Due to the oligopolistic nature of the industry, margins can reasonably be expected to remain strong and possibly even expand. We think now is a good time to pick up some shares while investors are focused on big tech stocks.